See the latest on how COVID-19 impacts food

See the latest on how COVID-19 impacts food here 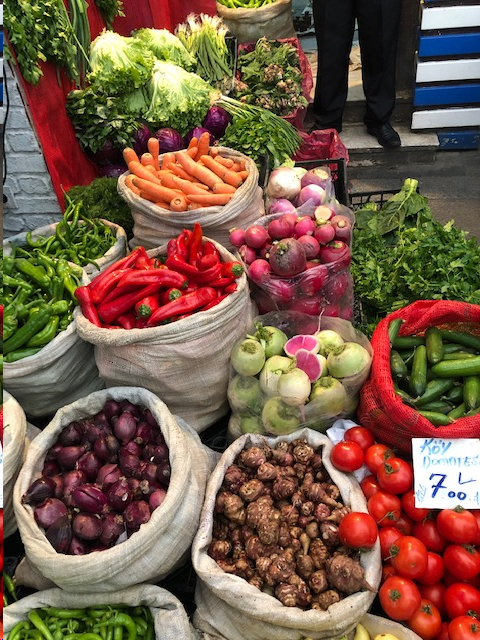 After decades of trying to solve some of the world’s most intractable conflicts, I concluded that bringing people together around a common table and focusing on the cultural dimensions of cuisine as a language that all parties can understand may be a better way to build peace than through other forms of development intervention.

In fact, I believe the kitchen is the new venue of foreign policy – and it’s how I started to use food as a way to teach students about conflict and peacebuilding. And what a journey it’s been so far!

In Washington, D.C. I discovered an urban laboratory. It was no secret that you could always tell where America was at war by counting the new ethnic restaurants opening in the area. So, one day I decided that these “conflict cuisines”, the foods prepared by people escaping war and violence, could be a way to show students about the power of food in preserving memories of home, and also of providing people with livelihoods that enabled them to survive. From this insight, my university course Conflict Cuisine: An Introduction to War and Peace Around the Dinner Table was born.

Little did I know when I started this project that I was becoming part of what is a growing movement of people – chefs, private citizens and governments – who are all looking at food as a way to promote social change. I found myself immersed in the ideas and people who were building a movement from the ground up – a movement based on the ideas of gastrodiplomacy and social gastronomy.

Gastrodiplomacy is a form of soft power. It is a means by which you can engage, promote and persuade others through the use of food. Think about food trucks in urban centers or nation-branding campaigns that have become a favorite tool of middle powers to project a positive image of a place through the palate. They are citizen-based food diplomacy as opposed to culinary diplomacy which something that governments do as part of high-level political engagement (state dinners are an apt example).

It makes sense because, after all, isn’t our first exposure to another culture through our palates?

In the 1970s during the Cold War, the U.S. opened relations with China. It was a bold political move and it proved very popular. Why?

Survey research showed that Americans had been eating Chinese food for years. It was this familiarity with a culture through its kitchen that moved geopolitics forward! Gastrodiplomacy.

Social Gastronomy is another term that has cropped up in the last few years. It refers to “positively impacting society with food.” In short, using food to do good.

Think about Massimo Boturra’s 2015 Refetorrio movement in Milan and of Gastromotiva’s work training vulnerable youth in Brazil’s favela (the word referring to a low-income area or slum). Efforts like this are now going global.

More recently, there’s the Chef’s Manifesto, part of the World Food Program’s outreach to achieve the Sustainable Development Goals by getting chefs around the globe to commit to principles of sustainability, reduction of food waste and going beyond their comfort zones to promote healthy eating. The Chef’s Manifesto is currently training Syrian refugee chefs in Turkey through the LIFE project and training prisoners to be chefs in the UK.

Social gastronomy demonstrates the tremendous good that comes when we transfer our love of food to the people behind that food. New tastes and flavors, shared over a common table are the first step toward inclusion; to embracing newcomers whose culinary cultural heritage is the first step toward integrating into a new homeland.

That is the challenge of citizen food diplomacy or social gastronomy.

Refugees’ stories are filled with examples of how food and recipes became a lifeline not only to cultural heritage, but also to livelihoods and social cohesion. Pick up any popular magazine and you will see articles about refugee chefs and entrepreneurs. Even social media abounds with stories of hope, mostly fulfilled at the dinner table.

All this points to the fact that food is a powerful form of communication. It is a language with its own grammar and syntax. And, most importantly, when we promote culture (such as we do when sharing a meal from someone else’s homeland) we also promote tolerance.

In truth, food is a powerful form of material culture.

Food is attractive, more stable than social communities and sharing food gives us a sense of stability. This is something that many human beings long for, especially in times of ever-growing uncertainty. It’s not surprising then that some sociologists have called ethnic restaurants the “living room of the homesick” – and with good reason.
In times of war or conflicts, or when there are masses of people fleeing from oppression, food is often one of the only tangible remnants of displacement. Willful destruction of cities or communities cannot rob people of their cuisine. Unlike destroying a monument of a building, it is hard to destroy food memories.

Clearly, we are experiencing a global food revolution. It is a revolution with many fronts and many players united by a common goal – to use food to create social change and to help build greater understanding of the biggest problems we are facing today – climate change, wars, refugees and the rise of megacities that have challenged the developing world to address how urban centers will cope with more people with less infrastructure.

At the heart of this revolution is the desire to create a more sustainable planet, to ensure that no one goes hungry, and that we give value to those who produce our food, while also embracing those who consume it.

The use of food as tool for political change is not only powerful, but it is empowering. This is why I study food and conflict. To be part of the powerful change that food can facilitate in the world and to do my part to empower others to find, through food and all it stands for, the way to a better world.

What are people saying?

Johanna Mendelson Forman is a creative force in peacebuilding. Throughout her decades of work in war-torn areas, she has found...

Johanna Mendelson Forman is a creative force in peacebuilding. Throughout her decades of work in war-torn areas, she has found innovative ways to bring people together. When she saw the promise of food, Johanna created the field of conflict cuisine and re-imagined how our palates lead to peace.
http://www.conflictcuisine.com/testimonials/rick-barton/

Johanna’s deep knowledge of foreign policy brings nuance and sophistication to the surprisingly complex topic of food in a volatile...

Johanna’s deep knowledge of foreign policy brings nuance and sophistication to the surprisingly complex topic of food in a volatile world. From the Middle East to Central America, Johanna’s ground-breaking work is helping the field to better understand the impactful role culture and food play in conflict zones.
http://www.conflictcuisine.com/testimonials/anthony-garrett/

Through her global work with the emerging movements of social gastronomy and culinary diplomacy, Johanna Mendelson Forman has helped bring...

Through her global work with the emerging movements of social gastronomy and culinary diplomacy, Johanna Mendelson Forman has helped bring the value of food as a tool for political change and socio-economic development into focus. Her unique experience in regions of conflict abroad, where food can be both a catalyst and a solution for instability, adds an important perspective to conversations about food-system change on both the local and global level. What’s more, she makes a mean brisket.
http://www.conflictcuisine.com/testimonials/mitchell-davis/
0
Conflict Cuisine

With more than two decades of experience in the international arena, working on post-conflict transition and democratization issues, Johanna Mendelson Forman holds a wealth of expertise and insights into the role of food in driving conflict and connecting people and communities. An Adjunct Professor at American University’s School of International Service where she teaches…

Stay up to date on news, articles, events and information related to the work of Conflict Cuisine®

Can’t hide the money. It will be traced. He knows they are all going to jail